An Enterprising Start to Playground Appeal 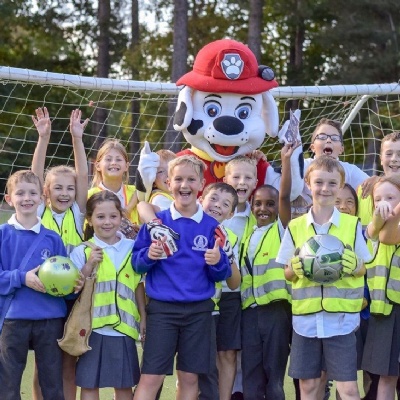 More than £3,500 was raised to kickstart our Playground Appeal

The sun shone and the Wooden Hill community came together for a spectacular afternoon of fun, frolics and fundraising.

Every class across the school took part in Enterprise Week which culminated in a fair where the children sold their wares and helped raised over £3680 to improve our playground.

Creative juices had truly been flowing throughout the week and on Friday 28th September  they manned stalls and sold their lovingly-made wares to their mums, dads, grannies, grandads and carers.

Dozens of people turned up to the spectacular event which was opened by the deputy mayor and her consort. From hand-decorated photo frames (Beaver Class) through to delicious milkshakes (Greenfinch), creative pencil toppers (Jay and Woodpecker classes) to cookies and chocolates (Year 6) the stalls were jam-packed with goodies.

So many people provided their services for free including tribute singer Rodney, India and her acoustic band, Rocksteady's Kieran and paw patrol mascot Marshall of Imagination Wonderland. The music and entertainment really produced a positive vibe and helped create a fun-filled atmosphere.

Deputy Mayor Cllr Pauline McKenzie and her consort had a wonderful time. She said: "All the young people we met were enthusiastic and should be very proud of such success in all aspects of their development."

A special thanks go to co-organisers Mrs Gogarty and Mrs Saunders who helped put this together with such enthusiasm in under a month!

"The atmosphere was fantastic and everyone had a smile on their face," Mrs Gogarty enthused. "The children really enjoyed being part of such an enterprising venture and I'd like to thank everyone - teachers, children, families and the wider Wooden Hill community for their support."

Chaffinch Class raised a whopping £211 and therefore, as the top fundraising class, will receive a special reward. Watch this space!